While it’s cold here now, I am looking through old photographs and found this one. I love how the clouds seem to fall out of the sky as sun still lights the Bookcliffs in the background.

A storm moved through here today. It snowed a little, but melted almost as fast as it fell. As the weather cleared out, in the distance, the clouds hugged Mt. Garfield.

I get to see a lot of storms push through here and many of them are pretty impressive. Black and white is even more dramatic. The one thing about digital that’s really nice is the ability to shoot LOTS of pictures of nothing but the sky.

I love my view in Western Colorado.

This is why I love living in Western Colorado. This never looks the same. 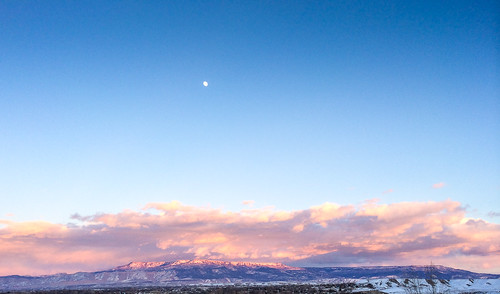 I Love My View

It would be nice if I had a better lens for such shots, but this turned out pretty nice. I love my view. This is sunrise in the summer. I want it to be summer again, soon. I am tired of the cold already. Aren’t these clouds pretty?

I’m done with school for the semester and I think I did well. I’m glad to be done for a few weeks. I worked hard, learned much, and enjoyed myself immensely. I’ve had so much fun learning and I met several women that I hope will continue to be part of my life for a long time to come. They have made such a positive impact on my life. They’re smart, full of life, and they inspire me to be better.

I’m looking forward to the next semester and what lies ahead.

I’m rarely able to capture the full beauty of the cloud works I see regularly in Grand Junction. On this day, as I was leaving class at Western Colorado Community College, I looked up and saw this composition. Shot with iPhone 4s using Camera+ from TapTapTap and refined in Lightroom5.

I took this picture years ago. Last night, while looking through photographs in Adobe LightRoom, I found it and played with the colors. It made the already vivid rainbow even more bright. I love my view. I just wish I had a wide-angle lens to capture more of the many double-rainbows I see here.

Looking at this again today, it made me long for the warmth of spring and summer again, although I do love autumn. It’s not quite cold yet. I still haven’t turned on heat in the house and I’m not uncomfortable.

Meanwhile, I’ll enjoy the weather that pushes through here in the wintertime, which is equally awesome. It’s just a different awesome and a colder awesome. But it’s all awesome!

I was looking around on my Skitch account today and found this. I know quite a few people have seen this, but certainly none of my Twitter friends. And, because this is a photo blog, and this was such a cool learning experience for me, I wanted to include it here.

I took this picture summer 2009. If you’re familiar with HDR, you know that three or more shots of different exposures are taken, then “melded” together to produce one photo. Usually I just do all this in Photoshop because my camera really hasn’t the capability. If I change exposure, then I wiggle the camera, no matter how careful I am.

While I understand it’s not HDR, it’s fun nevertheless. That, after all, is what this is all about. Does anyone know what “they” do call that?

In this shot though, I did change the exposure for each of three shots. One’s underexposed, another is exposed properly, and the third is overexposed.

I used Photomatix Pro to put them together, and probably tweaked it just a little in Photoshop afterward.

The interesting thing about this photo is the clouds. They almost jump off the page. I learned something from this shot that I didn’t understand before.

Previous to this photograph, I had been looking through the photographs at stuckincustoms.com. Trey Ratcliff travels the world with his camera and takes the most incredible HDR photographs. However, I noticed some of his picture seemed just a little surreal, and I couldn’t put my finger on it. That’s not a “judgement” either. I love his work. I remember one in particular in which he photographed sailboats. The masts looked like they were slightly raised a off the photograph. It was something I didn’t understand about his photographs. I assumed it was part of the process, but I didn’t know what part.

When I took and processed this picture, I realized what it was; movement. From one exposure to the next, the masts must have moved just a little as the boats moved with the water. The software doesn’t perfectly match the elements of the picture, so that effect is the result. At least that’s my best guess. Although the clouds didn’t move a lot, in my picture, they moved enough in my relatively long, manual-exposure-change time, to achieve that effect. I’m sure I also moved the camera while changing the exposure.

Anyway, I think THAT’s why those clouds jump off the page. They moved just a little each time I had to change exposure, and they were too different to match well in Photomatix.

Not only did I like the effect I got, I had a lot of fun playing with this photograph.