For some time, I’ve wanted to write about a new iPhone Photography App I found. But I also wanted to do a few comparison shots; shots done with the iPhone 3Gs’ default camera software, and the new discovery.

Camera+ is a really cool software. Its most useful feature to me is the ability to change exposure separately from focus. It doesn’t always make a big difference, but sometimes it really does.

I shot each pair of pictures one after the other so lighting was generally the same, and I tried to keep the camera in essentially the same place.

The following pair of photos are taken above my neighborhood and I set focus on Mt. Garfield in the background. The iPhone version isn’t bad; colors are rich enough. Seems whites are pretty good, too. In the Camera+ version, the clouds are brighter and the white of the house in front is much whiter. In fact, this is more what I was seeing, standing on my balcony.

Another one is somewhat more striking, but it’s got some problems of its own that are only exaggerated by that change in exposure. I think this demonstrates how much more detail you can get, but you can also abuse it and blow out parts of your picture you don’t want to. I think the left side of the boy’s head looks a little too bright. I don’t care about the sunshine streaming in, but I probably shouldn’t have taken it so bright. Compare the two: 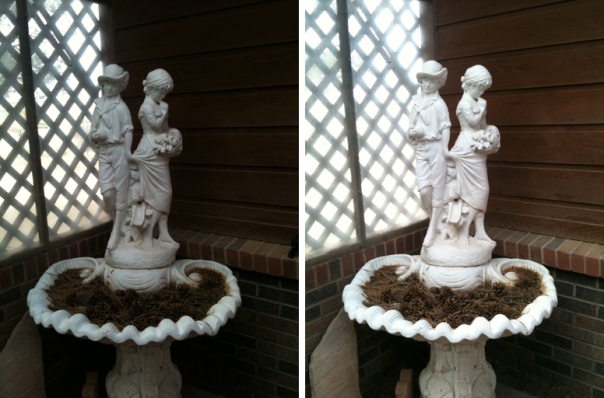 The last pair I took inside, and was VERY careful about where I was focusing and where I would take the exposure reading. The focus was on the face of the smaller elephant; the exposure was read in the darkest part under the larger elephant’s head. Neither photo is bad, and each has its strong points, but I just like the lighter exposure of the second one AND the wall color is more true, which is not yellow (or GREEN), but a dull white.

I’m afraid without further adjustment, the white balance is still off, leaving the wall a little greenish.  And, there are ways to fix that using the other features of this software. Rather than show you all that here, click on this link to Camera+ that will show you the various things the software can do and be used for. I recommend you watch the video, too.

If you take photos with your iPhone camera, you can also import them to this app to play with exposure, white balance, cropping, framing, etc.

To transfer these photos easily, and wirelessly to my computer this afternoon, I used another very useful app that I believe I mentioned in an earlier post. I think it’s worth another mention here because I have totally gotten my money’s worth. The app is Photo Transfer App, and it is $2.99. I have saved, many times over, the cost of this app just in time saved to get a couple of photos off my phone to my computer. You can also transfer files from the computer to the phone. This might seem odd, but I have lots of photos that lend themselves well to filter play, and some of the coolest photo filters and treatments are on my phone. That being said, if it’s something you want to do, I recommend changing the size of a hi-res photo so that it more resembles the size of photo taken on the phone. Too large a file will bog down the phone and the software, and that’s not fun at all.

I’ve had a lot of fun with the Camera+ app and to date, it is still only 99¢. I only wish I had an iPhone 4 with the better camera. One day….