← Buggy; Experimenting with E-mail Uploads
This Is a Test →

The drive over Owl Creek Pass was stunning. I love those rocky peaks. I don’t know if there’s a fire somewhere, or if the smoke in the air is a result of the numerous “prescribed” burns in the area. Whatever it is, it made clear pictures of the mountains impossible. It doesn’t help, either, that I have trouble with my camera. You’d think after all this time, I’d have that thing figured out. I did get a few good pictures, though. 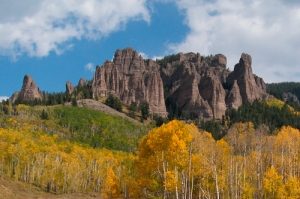 I’ve decided that I really need someone to drive while I just hike and take pictures. Where the pictures would be the nicest, there was no place to pull over. I did pull over a lot and walk to where the photo would be the best, but there were too many times it was a fair distance back to get the photograph I “saw” while driving.

I would like to make that run again next weekend. I think it probably doesn’t matter if the trees have leaves. That drive is just so beautiful because of the mountains and the light and shadow on those peaks. Perhaps after some weather, the air will be clearer and afford me better pictures of the mountains.

The road was very well marked, as I’d recently been told. I had no trouble navigating and there was only one place where I thought I might not be going the correct direction. I did just follow what appeared to be the main road and it turned out to be the right road. I can’t think of any part of that drive outside the Cimarron area that wasn’t totally picturesque. I went very slowly, partly because the road was very wash-boardie and partly because I didn’t want to rush it. I believe I was told it would take three to four hours; I was gone over six hours.

So, I took this photograph around Silverjack Reservoir. I likely wouldn’t have even seen this, except that I saw someone dismantling his tripod and camera outfit right there. When I looked back and saw it, I was embarrassed to go back — I don’t want to interrupt someone else’s photo op. After about a mile, I did turn around and when I got back, the fellow was gone, so I was able to take this picture without embarrassment.

There’s a trail there. It’s called the Alpine Trail? I’d like to walk up that. I’m not all that comfortable just heading out on my own. I’m not so much afraid of what I’ll run into, but what might happen if I run into something and nobody knows I’m gone.

Weather is supposed to change today. I’m excited for that. But that is why I was gone all weekend. I thought I needed to pack in some travel time before the weather changed drastically. Even so, I think I might try that trip again soon, trees or not.

Posted on October 4, 2010, in Uncategorized. Bookmark the permalink. Leave a comment.

← Buggy; Experimenting with E-mail Uploads
This Is a Test →